The Reasons For Stained Glass in Churches?

On 29, Aug 2019 | No Comments | In Aggrigate, Stained Glass Repair And Restoration | By dsgadmin 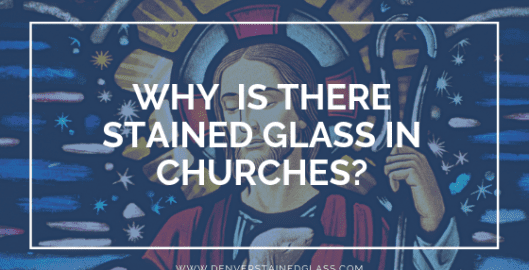 There is no denying that stained glass is lovely. Whether on the towering windows of Notre Dame Cathedral to the quaint windows of local Denver churches it is simply a delight to congregations and members and communities alike. These types of windows have been delighting congregations for more than a thousand years. They span generations and denominations alike. Regardless of people’s theology from church to church, one fact that most can agree on is–stained glass windows are stunning. But why exactly do churches have stained glass? Is there something to them beyond simply beauty? Is there something more to these pieces beyond their obvious artistic value? Why are they such a ubiquitous part of cathedrals and chapels not just here in Denver but across the US and even the world? As it were, there are actually a few reasons why you see stained glass on many churches. Today we will highlight the two most prominent ones–spiritual and practical.

The Christian Religion’s Relationship With Light

In the Christian religion, there has always been a special relationship with light. Stained glass in churches clearly reflects this. In fact, it allows for the use of light in a particularly ethereal way. It is understandable then, that churches from Methodists to Catholic appreciate the play of light combined with the iconography so important to them. In Genesis, God’s first words were “‘Let there be light” (Genesis 1:3-4) With this type of reference to light so early in such a sacred book, it is easy to see why Christian churches would embrace light through stained glass. Accordingly, they spent much time and energy developing a church feature that perfectly embodies God first gift to man. Stained glass windows in churches bring light into an otherwise dark interior, it casts out shadows and brings relief. Not unlike the God of Genesis. There is no doubt that early architects wanted light through the lovely ornate windows of old to play out much like it did in the Bible. They saw stained glass as a perfect way to highlight the spiritual truth of light while at the same time being functional. Ostensibly this happened over 1000 years ago, as, the oldest surviving stained glass window is found in the Augsburg Cathedral in Germany and was built in the 11th century. Since those days stained glass windows in churches have changed a lot. However, embracing the proverbial light of God has not. In fact, stained glass windows changed in their relationship with the church over time to become more than just spiritually useful but practical as well. Eventually, these windows began to not only served as a representation of the light of God but as a critical teaching tool as well.

During the medieval period, stained glass windows were the best way to teach the poor about God. Because during this time the masses were illiterate. Also, they lacked access to copies of the bible, which were few. Only the rich and clergy had Bibles so it was easier to disseminate stories through the use of stained glass on churches rather than books. It was more accessible and easier for the poor to understand. If fact, in some larger church windows almost all the important stories from the books of Genesis to Revelations played out in glass. Soon the saints too appeared on windows and helped inspire both the poor and rich struggling on their Christian journey. They lent hope to the hopeless in their time of need in a most lovely way. The stained glass and the light dancing light were the perfect teaching tool for the Christian religion. As cathedrals grew in size and technology so too did the depth of the symbolism contained in the stained glass. The new colors achieved through evolving chemistry appeared on the windows and were given deep meaning. Read the list of the various ways colors and symbols came to have meaning on stained glass over time.

Why Stained Glass In Modern Churches?

Times have, of course, changed quite a bit since stained glass began adorning churches. Today most church folks here in the US can read the bible for themselves. Meaning they don’t need stained glass to guide the way. However, stained glass on churches still remains revered and important. Many religions have come to embrace these lovely works of art. Today, rather than being a teaching tool for this generation, stained glass has become a way to preserve history for the next generation. Because today’s church stained glass has significant historical value. Furthermore, while still useful for conveying religious themes–it also has become very valuable secular art. Since stained glass in the US was made in an era of what could be considered the last frontier–it has intrinsic historical value. Furthermore, churches today often use stained glass windows to honor beloved family and patrons–making it valuable on a personal level. For these reasons, although stained glass in chapels and churches has changed over time, it is just as important today as it was 1000 years ago. It is an incredible asset for any church to preserve and restore when necessary.

To learn more about the stained glass on your Denver Church and whether or not it may need restoration, contact us at Church Stained Glass Restoration in today!