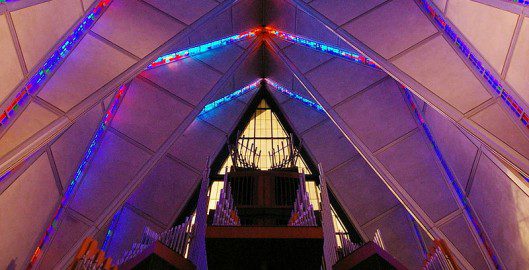 From the windows in the Sainte Chapelle to the Chartres Cathedral, it’s widely know that religious sites host some of the most beautiful stained glass in the world. But we also have our own spectacular display of artwork right here in our Denver, Colorado churches. That’s why Denver Stained Glass has decided to launch this series of articles about the great church stained glass of Colorado. And first on deck is the stained glass in the United States Air Force Academy Chapel.

The Chapel is unarguably the most fascinating feature of the US Air Force Academy in Colorado Springs. It’s construction was completed back in 1962 and was designed by Walter Netsch. Netsch’s designs had received some criticism in previous years because some people thought the incredible complexity of his buildings made them difficult to navigate. However, the Chapel is now regarded as his masterpiece and an incredible example of modern architecture. 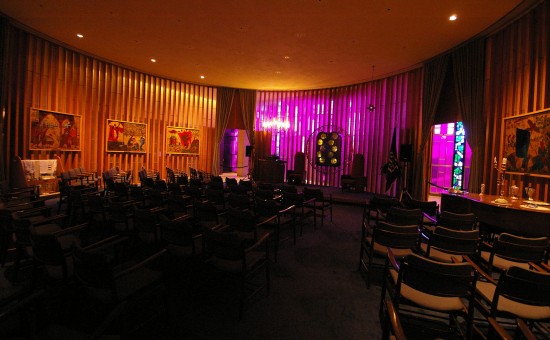 The Chapel is designed to house three separate worship areas and is split into two levels. The Jewish, Buddhist, and Catholic chapels are on the lower level and the Protestant nave is on the upper level. Two of these rooms feature some bright colorful stained glass windows that add to the building’s contemporary feel. The Jewish Chapel showcases a wall of bright purple stained glass windows that highlight the menorah in the center. In the Catholic Chapel, the focus is on a stained glass mural that depicts the Annunciation. 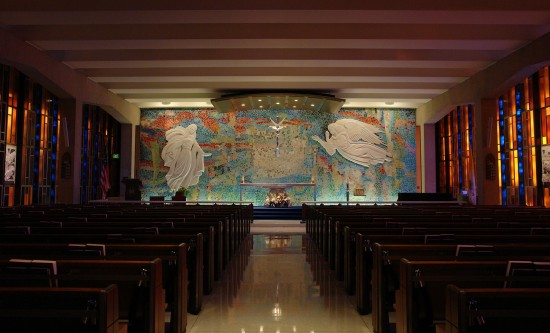 However, the part of the chapel that receives the most attention is its seventeen spires. It’s composed of 100 tetrahedrons that are placed approximately one feet apart. This gap is filled with colored mosaic stained glass. Though on the outside, this feature may look somewhat unusual, it’s absolutely stunning to look at inside. 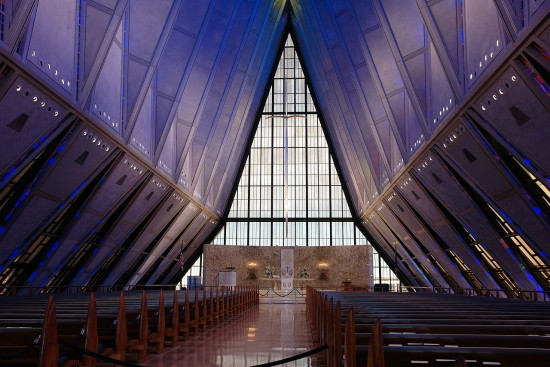 If you ever find yourself in Colorado Springs, we highly recommend putting the U.S. Air Force Academy Cadet Chapel on your list. It’s a compelling example of modern architecture and it houses some of the most beautiful stained glass art in Colorado.

Fueled by a desire to preserve a centuries old tradition and one of the world’s most intricate and captivating art forms, Martin Faith is a dedicated craftsman and the proud owner of Denver Stained Glass. Using the skills he gained as a stained glass artisan in Glasgow, Scotland, Martin has spent the last thirty years focusing his efforts on creating exquisite works of art to adorn the walls of homes, churches, and buildings all across Colorado. His extensive knowledge in the areas of glassmaking, modern design, and historic preservation make him an expert in his trade and have given him a reputation as one of the most celebrated stained glass artisans of his time.